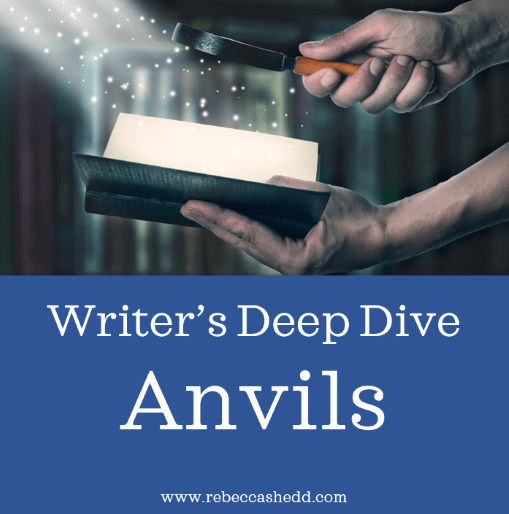 The anvil is an essential piece of a blacksmith’s equipment and the most iconic symbol of the trade. They may look simple, but there is an incredible amount of clever design that goes into this piece of technology.

The first anvils were made of stone, then bronze, then wrought iron. As steel became commonplace, iron anvils were faced with it. Most modern anvils are made of forged or cast steel. Steel provides a hard working surface that prevents the anvil from deforming under the repeated impacts and reduces the amount of force lost with each hammer blow.

Early anvils were a simple block. The shape we are familiar with today is the London pattern anvil from the mid-19th century.

The standard anvil is made of these parts:

Face – This is the flat top that is the primary work surface. It has rounded sides that will not cut into the metal. The face is hardened and tempered. Striking the anvil face with full force is discouraged since it can chip or deform it.

Horn – The rounded horn is used to bend metal into curved shapes. It can also be used for drawing. Some anvils have two horns, one rounded and the other square. Others have side horns or clips.

Step – The transition between the horn and the face is the step, since it “steps” down. It is soft and used as a cutting surface.

Hardy Hole – A square hole in the face that is used for punching, bending, and holding a variety of tools called hardy tools.

Pritchel Hole – A hole in the face smaller than the hardy hole that is mainly used for punching.

Most anvils made since the late 18th century have hardy and pritchel holes while European medieval anvils do not.

It is critical for the anvil to have a sturdy base that could withstand the impacts and fire of the forge. Large logs or a big piece of timber are traditional and still common today. Often several feet of the base are buried in the floor to prevent it from moving or falling over. The anvil is secured to the base using spikes, chains, large staples, metal straps, or any other method the smith could come up with.

The anvil was placed close to the forge, so the smith didn’t have to walk far with rapidly cooling metal.

During the Middle Ages, a common practice among blacksmiths was to strike the metal three times, then lightly tap the anvil face. When closing their shops on Saturday, smiths would commonly strike the anvil face three times, although not with full force. Both practices were thought to scare away the devil and witches.

You could write a forge accident where the anvil is not properly secured and falls off the base or the base and anvil topple over.