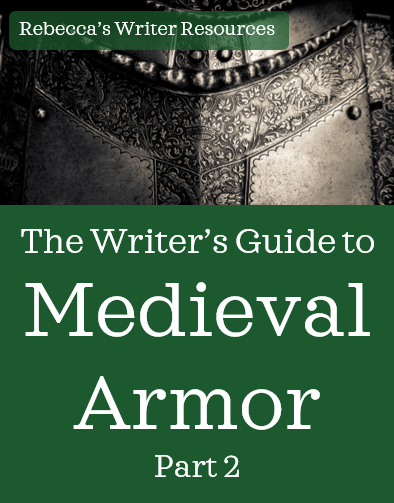 I hope you enjoyed last week’s post on armor myths because I am covering some more this week.

As always, magic is the exception to the rules. Because magic.

Fantasy seems to be in love with leather armor. You can see it from “Vikings” to “The Lord of the Rings” to Dungeons & Dragons. But how prevalent was it during the Middle Ages? An extremely heated debated is raging online.

What we do know is that boiled leather was quite common in medieval Europe and was used to make protective cases for books and delicate instruments such as astrolabes. As for its use in making armor, there are multiple examples of leather limb armor but few of leather torso armor. There are reports of starving soldiers eating their shields and other leather kit like Josephus’ account from the Siege of Jerusalem in 70 AD and advice from a medieval Arab author on coating leather armor with crushed minerals mixed with glue to made it tougher. It is believed the term “cuirass,” referring to armor covering the torso, comes from the French term cuir bouilli, meaning boiled leather. We have few physical examples of medieval leather torso armor but there is uncertainty whether that is due to its scarcity or because they rotted away.

Compounding the problem is a lot of misidentification of armor in medieval paintings. Much of what is thought to be leather or studded leather is in fact brigandine, a type of armor made up of small metal bands or plates riveted to an outer layer of cloth, canvas or leather. In short, the debate still rages. [1]

The price of armor of course depended on the type, quality, and time period. I will be detailing cost of specific types of armor in their own posts. I will however provide you with some highlights to give you an idea.

There is a common belief that only knights wore armor. Obviously, the cost would limit who could acquire certain types but we have evidence of non-knightly people owning various types of armor. In fact, it was sometimes the law. In England in 1181 it was mandatory for every freeman who owned goods valued at 10 marks (1 mark = 13s 4d) to have a mail shirt, helmet, and spear. Any freeman poorer than that was required to own a spear, helmet, and gambeson. During the 15th and 16th centuries, soldiers in full plate made up 60-70% of the French army and the percentages were probably similar in other countries. [6] Brigandine was popular with outlaws and highwaymen because it was cheap and easy to make and repair. We also have a lot of artwork from the medieval period showing soldiers in various forms of armor. As you can see in the painting below depicting the 15th century Battle of Crécy, everyone is wearing armor, including the English archers who were commoners and weren’t even worth enough to ransom.

If you want my blog delivered straight to your inbox every month along with exclusive content and giveaways please sign up for my newsletter.

1 Comments on “The Writer’s Guide to Medieval Armor: Part 2”