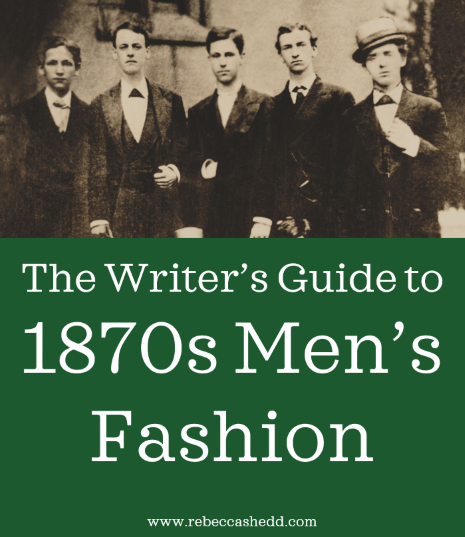 Men’s fashions had already started to converge from those of women’s and the trend continued in the 1870s. While the bustle and princess line styles were over-the-top frothy confections, men’s tastes ran more to conservative and understated. By this decade, it’s easy to see today’s styles reflected in the clothing and some photographs from the period could be mistaken for being as late as the 1950s.

For an overview of fashion for the entire century, please read my Writer’s Guide to 19th Century Fashion.

The fashionable silhouette slimmed again from the baggy oversized styles of the 1860s. All elements also became plainer and the overall line crisper and cleaner. A tailoring journal in 1871 put it best, saying, “Gentlemen dress as quietly as it is possible to do and there are no extremes in dress.” [1]

The shirt was the standard first layer and cotton was now the most common fabric. The points of the collar were being pressed down into wings. Shirts had become plain, with the ruffles, pleats, and starch disappearing. [2] Cotton or linen drawers were worn under trousers and the “union suit,” also known as “long johns,” were popular.

The frock coat was standard for daytime affairs and had a waist seam and full, knee-length skirts. [3] It was considered the most formal daytime option. Short frock coats, with skirts ending mid-thigh or shorter, were briefly in fashion at the beginning of the decade. [4] The morning coat or cutaway coat was generally considered less formal although it did depend on the fabric it was made from. Dark wool was considerably more proper than tweed. [5] It had a waist seam, could be either single or double breasted, and usually closed with three to four buttons. Silk braid was occasionally used on the edges.

Waistcoats or vests could be cut straight across or longer with points. While they had been made of colorful or patterned fabric in previous decades, they were increasingly plain colors or made of the same fabric as the coat and trousers, what was known as a “ditto suit.”

Trousers were straight and tubular without pleats at the waist.

The sack or lounge suit was popular, especially among the lower classes and for informal events. The jacket had no waist seam, and the waistcoat and trousers were usually made from the same fabric. [6] It was paired with a plain white shirt and a tie.

A dark tailcoat paired with a white shirt, a dark, double-breasted waistcoat, and dark trousers was the standard look for evening. [7] A white cravat or bowtie was also typical. We would recognize it today as “white tie and tails.”

The greatcoat styles of the previous decade were still common, including the chesterfield, ulster, and Inverness coats. The double-breasted reefer jacket was a popular choice for sporting. [8]

Hair became shorter and worn parted to the side. Facial hair returned with a vengeance and beards, moustaches, and mutton chops were all common. However, it was important to keep all facial hair neatly trimmed.

The top hat was considered more formal and was usually worn for evening or paired with fancy frock or morning coats. The bowler was popular for daytime and for pairing with informal morning coats and sack suits. [9]

Shoes were made of leather and typically low and buttoned or laced closed. Boots were worn for riding.

The gold watch chain and the stick pin were the only bling an 1870s gentleman was allowed. [10] Gloves were still commonly worn for both daytime and evening. A variety of neckwear was popular including the cravat, the bowtie, and the necktie, tied with a four-in-hand knot. Canes or walking sticks were popular and are seen in many portraits and fashion plates.

If you want my blog delivered straight to your inbox every month along with exclusive content and giveaways please sign up for my email list here.