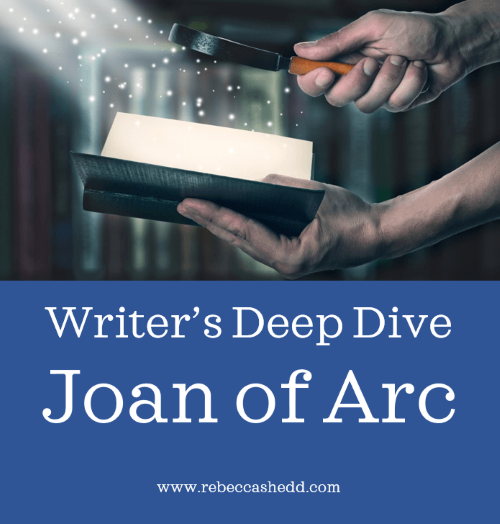 When you ask people for a list of famous women warriors, Joan of Arc is probably in the top five. She casts a long shadow over French history and the image of a woman leading an army into battle is a visceral one that has inspired many writers.

Joan of Arc, or Jeanne d’Arc in French, was born around 1412 in the village of Domrémy in the Lorraine region of France to Jacques d’Arc and Isabelle Romée. [1] Her family owned a farm and her father was a village official.

During this period, France was embroiled in the Hundred Year’s War with England, which had begun in 1337. [2] There was also a civil war between two French factions, Armagnacs and the Burgundians. The Burgundians allied with the English and between them conquered half of France. The leader of the Armagnacs and heir to the throne, Charles VII, was outnumbered and cut off. All four of his older brothers had been killed. [3] The war had a personal impact on Joan because the region around her village was raided by the Burgundians.

Around 1425, at thirteen, Joan received her first vision in her father’s garden. [4] Saint Michael the Archangel, Saint Catherine of Alexandria, and Saint Margaret of Antioch appeared to her and instructed her to help the prince and get him crowned at Reimes.

In May 1428, she petitioned the garrison commander of the town of Vaucouleurs, Robert de Baudricourt, for soldiers to escort her to the royal court at Chinon. [5] He refused her. She returned in January, when he again refused her, then in February with the support of two of his soldiers. He was finally swayed by her and the enthusiasm of his men. She traveled with an escort of six soldiers and swapped out her dress for a soldier’s outfit as protection against rape if they should be attacked. [6]

Joan arrived at the town of Chinon in late February or early March 1429. When she entered the court, she looked at the man sitting on the throne and knew he wasn’t the prince. She picked the prince out of the crowd where he had disguised himself. Charles was incredibly moved by her in a following private conversation. [7] He had armor and a banner made for her and she was sent to the besieged city of Orléans.

She was originally meant to be a morale booster, but not actually in command. When she arrived at Orleans, she was left out of the military meetings. [8] On May 4th, she learned that the French forces were attacking the outlying fortress of Saint Loup. She mounted her horse, took up her banner, and rode out to the battle. She found the Armagnacs retreating, but she rallied them and they took the fortress. [9]

Over the next year, Joan led the Armagnac forces in a series of victories, although she did not directly take part in the fighting and killed no one, preferring to command and inspire the troops. Many times, the military commanders urged delay while she urged aggressive advance. Every time they followed her plan, they won. The army cleared a path to Reimes and on July 16th, 1429, Charles was crowned king with Joan in a place of honor. [10]

In the spring of 1430, the Burgundians, who were allied with the English, began attacking towns loyal to the king and laid siege to Compiègne. Joan led a relief force, but they were attacked by the Burgundians and Joan was captured. [11] She was turned over to the English.

She was put on trial for heresy on January 9th, 1431. [12] The entire proceeding was a politically driven sham and the jury was packed with pro-English clergy. Despite that, Joan showed incredible shrewdness in her answers, repeatedly side-stepping verbal traps they set for her. She was condemned of heresy but was told she would be spared execution if she signed a document. Since she was illiterate and it was written in Latin, she did not know she had signed an adjuration, renouncing all her claims. [13]

Afterward, she was returned to English custody where she was chained, mistreated, and suffered repeated attempts by the guards to rape her. [14] Her soldier’s outfit, which had been previously taken from her, was returned. She began wearing it to protect herself from the advances of the guards. Unfortunately, it was all the proof the English needed that she had relapsed in her heresy. When the English bishop who had headed her trial demanded that she renounce her visions and claims, she refused.[15]

On May 30th, 1431, Joan was taken to Rouen’s marketplace, tied to a pillar, and burned to death. [16] Her charred remains were thrown into the Seine River. She was nineteen years old.

For writers, Joan of Arc is another source of inspiration when writing women warriors leading armies. It is clear from Joan’s string of military successes that she had a keen grasp of military strategy and tactics. Yet on her mission to relieve Compiègne, she disbanded all but four hundred men of her army because she was struggling to feed them. Usually, medieval armies relied on the countryside to supply them with food and water, but in this case, it could not. This is a great example of how critical it was for armies to be properly supplied and to leave nothing up to chance.

Joan is also a great example of the power of inspiration. Before she arrived at the royal court, the prince and his supporters were teetering on the edge of defeat. Over half of France was controlled by the English and Burgundians, and they had not had a significant victory in a generation. Yet Joan sparked a pride and ferocity in them that drove them to victory after victory. Even after her death, the Armagnacs continued fighting with a vengeance, turning the tide of the war. In 1435, the Burgundians signed the Treaty of Arras, formally abandoning their alliance with the English, and the English were driven out of all of France except Calais after the Battle of Castillon in 1453.

Joan was canonized in the Roman Catholic Church and is one of the patron saints of France and female warriors.

← The Writer’s Guide to Women in Single Combat
Next Post →