The Writer’s Guide to Medieval Armies 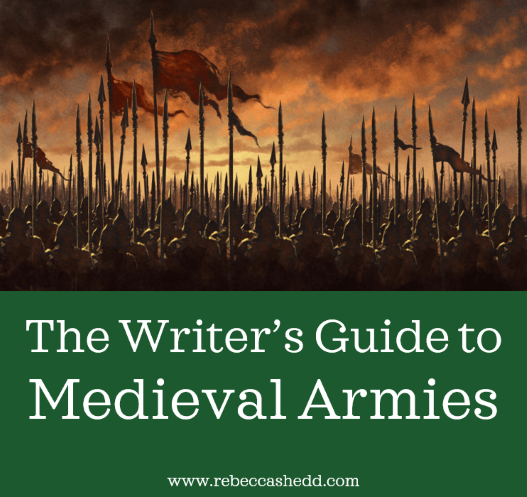 When you ask a reader for their favorite scene in a book it is often a battle. From the despair and deliverance of Helm’s Deep to the brutality of the Battle of the Blackwater to the desperation of the Battle of Hogwarts, nothing has quite the power of a battle to get our hearts pounding and keep the pages turning.

War is common in the fantasy genre. It’s a great vehicle for drama and change, as well as providing excitement and tension. The stakes for your characters are never higher than when they are in battle. Yet to have a battle, you need an army. Medieval Europe and its bloody history are a great source of inspiration.

As always, magic is the exception to the rule. Because magic.

Medieval armies were smaller than they are commonly depicted in movies, TV shows, books, and video games. There is a misconception that medieval armies numbered about 200,000 soldiers. Although some ancient armies were quite large, by the Middle Ages most armies were between 5,000 and 15,000 men. For example, at the battle of Agincourt in 1415, the French army numbered roughly 15,000 men while the English army had between 6,000 and 8,000 soldiers. [1]

Just like modern armies, those in the Middle Ages had different types of soldiers that were utilized in different ways.

Infantry – Also known as foot soldiers or men-at-arms, infantry units were the backbone of most medieval armies and comprised most of their numbers. They would engage the enemy on foot. Heavy infantry had substantial armor while light infantry was more lightly armored and could move faster. Skirmishers were a type of light infantry that would engage ahead of the main force. Infantry units could be specialized in a weapon such as the Swiss pikemen.

Ranged – Ranged fighters included archers, crossbowmen, and later cannon crews and musketeers. They were often grouped together in formations to concentrate fire on the enemy. There were specialized fighters in this group as well, including the English longbowmen and the Genoese crossbowmen.

Cavalry – Cavalry fought from horseback. The most well-known members of medieval cavalry were knights. Just like infantry, there were light and heavy versions of cavalry. While they limited themselves to only using horses as mounts in medieval Europe, in other parts of the world they used other animals such as elephants and camels.

Sappers – Sappers were trained to take down enemy fortifications. I spoke about them in my Writer’s Guide to Besieging a Castle. They would use tunneling, explosives, or a combination of the two to destroy walls, letting their allies in.

Support Staff –Every army needs its noncombatant support staff. Collectively, they were known as the baggage train during the Middle Ages and included cooks, nurses, blacksmiths, farriers, clerks, laundresses, engineers, carters, and carpenters. Sometimes the families of soldiers would travel with the army in the baggage train.

To give you an idea of the numbers and breakdown of roles, below is the makeup of the English army at the Battle of Crecy in 1346, which numbered 15,250 men.

4,740 Foot archers from the counties

Here is the makeup of the French army at the battle of Agincourt:

2 Comments on “The Writer’s Guide to Medieval Armies”